Low to medium level of protection for your equipment

Most commonly used for PC backup

Not suitable for generators

Medium level of protection for your equipment

Can be used as a long runtime unit

Not suitable for generators

High level of protection for your equipment

Used for general AC backup and protection on sensitive equipment

Can be used as a long runtime unit

Only option suitable for generators

Please note we have excluded the ferro-resonant type UPS systems, as the technology used for these UPS systems is outdated and the unit is very wasteful of energy due to the inefficiencies of the unit.

If you are looking for a protection system for expensive or very sensitive equipment, then you need an online double conversion UPS system.

Online double conversion UPS system topology can be seen below:

The load on an online UPS system runs constantly off the inverter and the batteries. The mains (Eskom supply) is only used to charge the batteries, therefore your supply power or lack thereof has no effect on the running of your equipment. Online UPS systems are also used were a stable 50Hz frequency is required.

Please note: Only online UPS systems can be used on generators as they are not effected by the generators varying frequency.

A line interactive UPS system and an entry-level UPS system are very similar in there construction. Both have a transfer switch and both supply power directly from the mains. The actual difference is in the level of protection that they offer. Mainly a line interactive unit supplies your load a pure sine wave under power failure conditions and has a larger and more effective AVR, whereas an entry-level UPS system under power failure conditions supplies your load a modified sinewave and offers little protection in the form of an AVR.

Line interactive UPS system topology can be seen below: 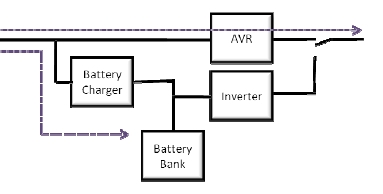 Under normal conditions your supply power goes straight through the unit and is regulated by an AVR, while a small portion of that supply power is used to charge the batteries. Under a power failure condition, the unit switches over to run from the batteries and the inverter.

An example of a pure sine wave can be seen below:

Normal AC mains, given to us from Eskom is of a pure sine wave nature. It has very little harmonic distortion, subject to outside interference, such as lightning and large AC loads etc. All AC equipment in stores today have been designed to run off a pure sine wave form, including computers, motors, certain lights etc.

An example of a modified sine wave can be seen below:

Modified sine wave inverters and UPS systems are very cheap to produce but could be very costly if installed onto the incorrect equipment, for example, motors, fluorescent globes with standard ballasts, anything with a high inrush or speed control or anything that has sensitive information stored on it, or is of a sensitive nature itself.

Please note that some UPS systems, most notably the 600VA, under-the-desk type UPS systems are modified sine wave, but because a PC only runs off the inverter for a short period, when there is a power failure, they are less likely to be damaged as a result from the modified wave form.